DEPART Foundation, is a 501(c)(3) public charity dedicated to the discussion, exhibition, and promotion of art and in particular to the development and support of contemporary, emerging artists, whose work and careers are departing from their previous endeavors or predecessors.

DEPART Foundation Italy, since its founding in 2008, has served as a catalyst for the Italian art community, strengthening the dialogue between Italy and the international art world and some of the most interesting and dynamic artists of our time have been presented for the first time in Rome by DEPART Foundation Italy.

DEPART Foundation’s goal today is to foster broad education and critical discourse in order to enhance creativity and innovation in the realms of art, design, architecture within the contemporary scene in the United States, Italy and beyond.

OUR BELIEF:
As we activate new models of cross-cultural artistic participation, we spawn unexpected outcomes for engagement and enrichment.

OUR PURPOSE:
To provide an alternative platform for creative experimentation and exploration, set within a global context, that thrives outside conventional cultural structures.

THE INSIGHT THAT GUIDES US: THE FREEDOM TO CREATE.
When artists and curators depart from the influence of traditional institutions and commerce, they enjoy a precious freedom to break out and break through to rich and resonant new ideas and modes of expression.

OUR METHOD: CHAMPIONING COLLABORATION.
By fostering new forms of collaboration, we encourage both artists and audiences to stretch and to take risks.

THE PIVOT POINT: DEPARTING FROM…AIMING FOR…
The impact of the work of Depart Foundation can best be understood as the charting of new artistic destinations with every project and program we undertake. 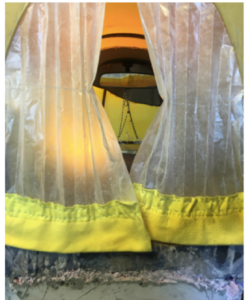 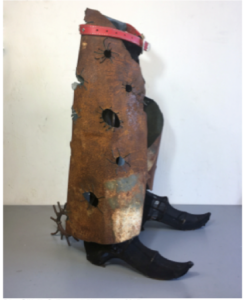 DEPART FOUNDATION presents RELAX SHADEANS, an exhibition of new works by Riley O’Neill in the project room. The LA based, self-taught artist combines found objects, mementos, and mixed media to create sculptures and collages that set the scene for his misunderstood narratives. Connotations of “the West” are sprinkled throughout the work, which may reflect O’Neill’s “internal struggle with edited histories of settler colonization, attachment to place, and masculinity.”

Motifs that resemble cowboy boots, covered wagons, maps, and road signs invite viewers to entertain and justify the mimicry that runs throughout the exhibition.

In Relax Shadeans, the stage is set, the lights are lit, and the band plays, but where have all the characters gone?

DEPART Foundation
DEPART FOUNDATION provides an alternative platform for creative experimentation and exploration, set within a global context, that thrives outside of conventional, cultural structures. The impact of its work can best be understood as the charting of new artistic destinations with every project and program it undertakes.

Since its founding in 2008, DEPART Foundation has served as a catalyst for the Italian art and cultural community, strengthening the dialogue between Italy and the international art world. DEPART Foundation has actively encouraged artistic production through sponsorship of young and established artists and the provision of space and resources conducive to research, production and exhibition of new work, and to the presentation of educational and public programs.